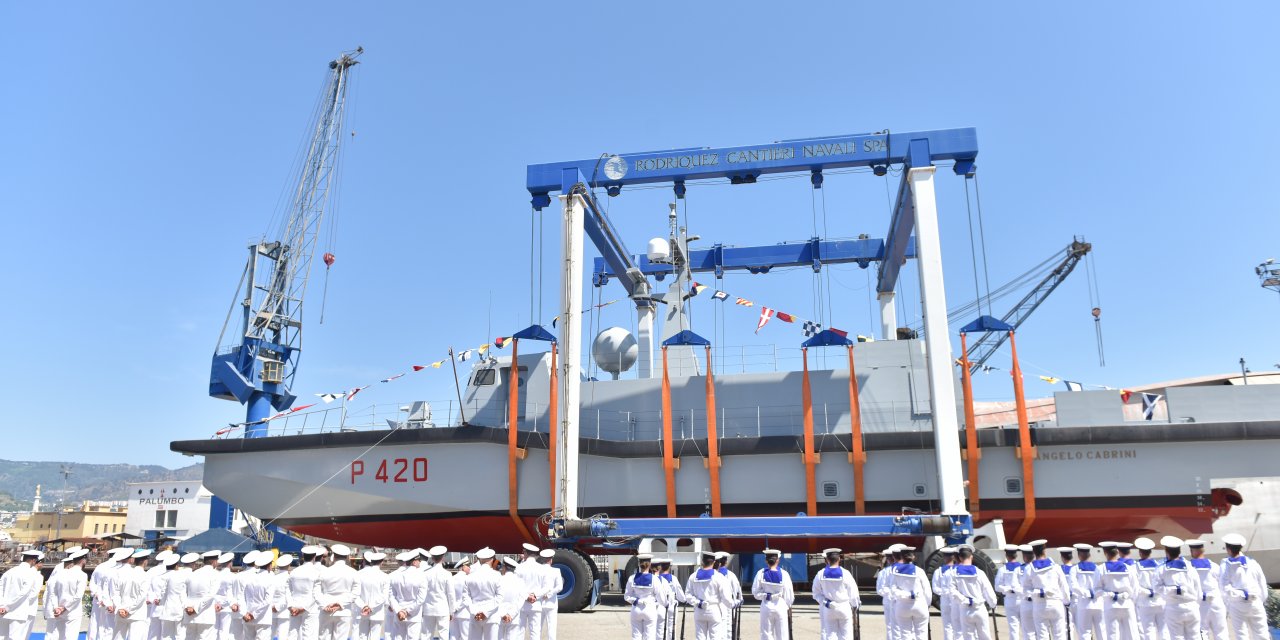 LAUNCH OF THE ITALIAN NAVY’S “ANGELO CABRINI” IN MESSINA

Messina, 26 May 2018 – The launching ceremony of the “Angelo Cabrini” naval vessel, the first of twohigh-speed multipurpose patrol boats (UNPAV) commissioned by the Italian Navy from Intermarine S.p.A. (a subsidiary of the Immsi S.p.A. listed industrial group - IMS.MI), was held this morning in Messina, Sicily.

The ceremony was attended by the Chief of the General Staff of the Navy, Squadron Vice-Admiral Valter Girardelli, the management of Intermarine and civil and religious dignitaries. The boat has been named “Angelo Cabrini”, in honour of the Italian Navy admiral and commando, who was decorated with the Gold Medal for Military Valour for the sinking of the York, a British heavy cruiser, on 26 March 1941 in Souda Bay, Crete.

The vessel was launched by Ms Anna Accardo, mother of Second Officer Nicola Fele, an Italian Navy commando decorated with the Gold Medal for Naval Valour, who died in active service in the Adriatic Seaon 15 February 1992.

The UNPAV is a versatile and modern vessel that will add notable value to the capabilities of the Italian Navy. In this case, the vessels of the Cabrini class will support the operations of the Navy’s Special Forces (Operational Raider Group) during training and during actual operations. They will also be used to control maritime traffic, to combat illicit trafficking, to ensure security in environments where there is a threat of asymmetric warfare, and to assist personnel evacuation from crisis areas.

“The Cabrini is a further example of the significant capabilities and outstanding professionalism of our national industry made up of large industrial groups and small-medium companies,” said Squadron Vice-Admiral Valter Girardelli, Chief of the General Staff of the Italian Navy. “It is the result of the productivity of the country-system: a product that, like others, reflects the quality of “Made in Italy” , which is admired all over the world.”

“Over the years, Intermarine has built up solid experience and expertise in the design and construction of military vessels with extremely stringent operating requirements,” declared Intermarine CEO Livio Corghi. “We have established ourselves as primary players on the international market by developing an excellent reputation as a supplier of special boats, including minesweepers, to the world’s most important navies. We are certainly extremely proud and satisfied to work with the Italian Navy.”

The 40 million euro contract awarded to Intermarine by the Italian Navy at the end of 2016 provides for the construction of a second UNPAV, whose launch will take place in the near future. In the meantime, at the Messina shipyard, Intermarine will continue the outfitting of the “Angelo Cabrini”, which is due to be delivered in April 2019.

Note for editors:Versatility is one of the distinguishing characteristics of UNPAV vessels, which are designed to meet a widerange of needs, thanks to a platform providing for the transportation of special teams from Italy's elite naval commando force, COMSUBIN-GOI. The boats can travel at high speeds and are built with material soffering ballistic protection, heat resistance, shielding against electromagnetic interference, reduced weightand high structural strength.

The vessel, built in composite materials, has a length of 44.16 m LOA, a beam of 8.4 m LPP and a displacement of 190 t: it features a stern ramp to embark a Rigid Hull Inflatable Boat Zodiac Hurricane 733 for COMSUBIN operational units, and an integrated launch and recovery system.

The propulsion system consisting of 3 pairs of Kamewa waterjets and 16V 2000 M94 MTU diesel engines, installed in two different engine rooms, delivers a top speed of more than 30 knots. The waterjets offer high manoeuvrability and responsiveness to maintain stability when the boat is flanking other units.

The vessel offers a high level of automation to limit the number of crew.

The bridge has ballistic protection and affords 360° vision. The bridge operating console enables control ofthe entire combat system as well as of navigation and steering equipment and of the platform control andmonitoring system.