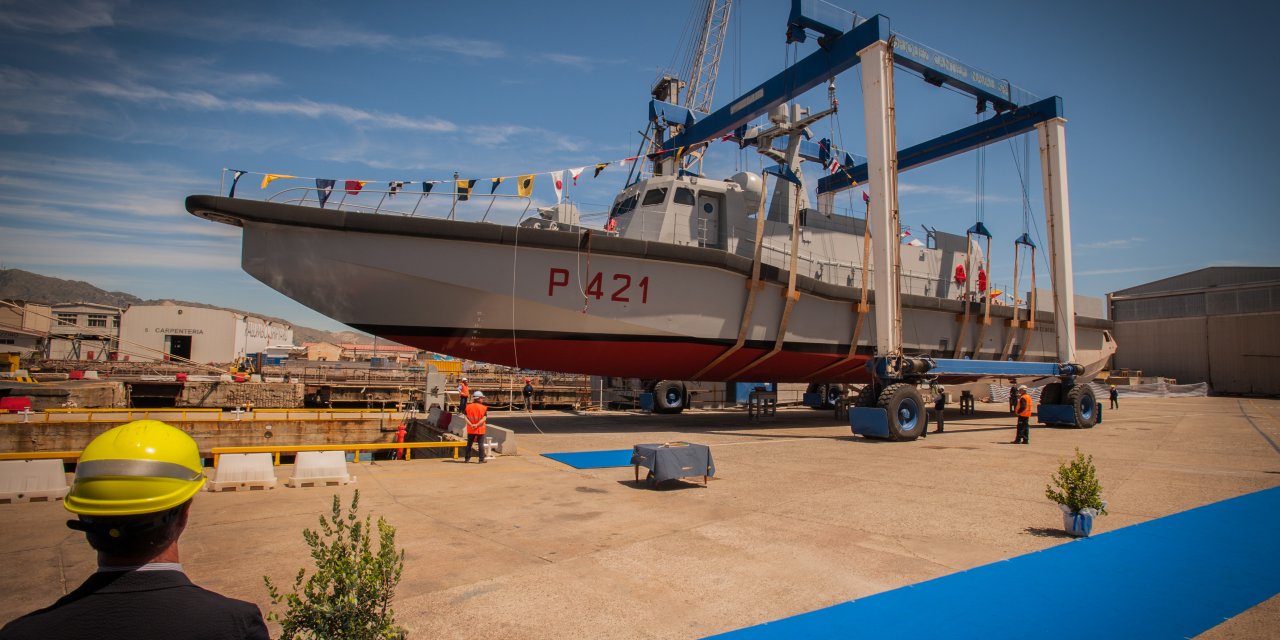 Messina, 11 May 2019 – The launching ceremony of the “Tullio Tedeschi” naval vessel, the second of two high-speed multipurpose patrol boats (UNPAV) commissioned by the Italian Navy from Intermarine S.p.A. (a subsidiary of the Immsi S.p.A. listed industrial group - IMS.MI), was held this morning in Messina, Sicily.

The ceremony was attended by the Chief of the General Staff of the Navy, Squadron Vice-Admiral Valter Girardelli, the management of Intermarine, and civil and religious dignitaries.

The boat has been named “Tullio Tedeschi”, in honour of a non-commissioned officer of Italy’s Royal Navy in the 10th Light Flotilla and subsequently in the Assault Ships Unit stationed in Taranto (Mariassalto) during the second world war. Decorated with the Gold Medal for Military Valour for the sinking of the British heavy cruiser York at Suda Bay, Crete, on 26 March 1941, commando Tedeschi died on 2 November 1987 in Isernia, the city where he was born in 1910.

The vessel was launched by Tullio Tedeschi's daughter Rosangela Tedeschi.

The UNPAVs are versatile and modern vessels that will add notable value to the capabilities of the Italian Navy by supporting the operations of its Special Forces (Operational Raider Group) during training and during actual operations. The two vessels in the class (“Cabrini”, the class lead vessel, and “Tedeschi”) will also be used to control maritime traffic, to combat illicit trafficking, to ensure security in environments where there is a threat of asymmetric warfare, and to assist personnel evacuation from crisis areas.

“The launch and subsequent handover of the Tedeschi concludes the UNPAV construction program to equip the diver and commando unit with state-of-the-art tools to meet the needs of mobility, projectability and intervention capability,” said Squadron Vice-Admiral Valter Girardelli, Chief of the General Staff of the Italian Navy. “The objective of the country's military maritime strategy is to ensure the defence of Italy's coastal waters, an open frontier that is not easy to patrol, through a vision that promotes continuous, synergetic management of the domains of "Advanced Defence" and "Internal Security".

“Intermarine is a world leader in the design, construction and outfitting of military vessels with extremely stringent operating requirements, as the result of extensive work to perfect and adapt our basic project to the specific needs of each contract awarder,” said Intermarine CEO Livio Corghi. “We have established ourselves on the international market by developing an excellent reputation as a supplier of special boats, notably minesweepers, to the world’s most illustrious navies, as well as patrol boats in aluminium and composite material for search and rescue operations, and UNPAVs, an extraordinary type of vessel. We are certainly extremely proud and satisfied to work with the Italian Navy.”

The Tullio Tedeschi is the second of the two UNPAVs commissioned by the Italian Navy from Intermarine in 2016.

The boats can accommodate a permanent crew and special forces teams, for a total of 27 people. They are built in composite material, have a length of 44.16 m LOA, a beam of 8.4 m for 1.5 m immersion, and a displacement of 190 t. They feature a stern ramp to embark a Rigid Hull Inflatable Boat Zodiac Hurricane 733 for COMSUBIN-GOI operational units, and an integrated launch and recovery system.

The waterjets offer high manoeuvrability and responsiveness to maintain stability when the boat is flanking other units.