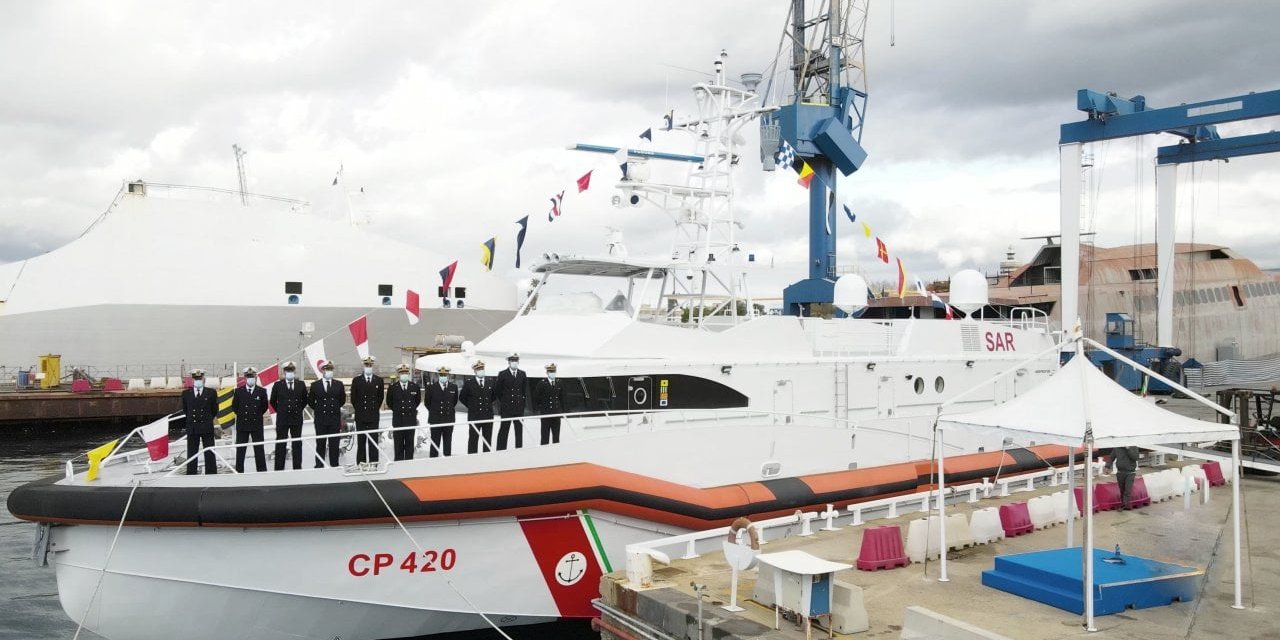 INTERMARINE (IMMSI GROUP): LAUNCH IN MESSINA OF THE LONGEST SELF-RIGHTING AND UNSINKABLE BOAT EVER BUILT IN ITALY

THE VESSEL WILL BEAR THE NAME NATALE DE GRAZIA, FOR THE HEROIC CAPTAIN WHO DEDICATED HIS LIFE TO THE PROTECTION OF THE SEAS

La Spezia, 14 December 2020 – The launch ceremony of the CP420 “Natale De Grazia”, the longest self-righting and unsinkable boat ever built in Italy, was held at the port of Messina, Sicily. The vessel was commissioned from Intermarine S.p.A., a subsidiary of the Immsi S.p.A. industrial group (IMS.MI), by the General Command of the Port Captaincies - Coast Guard.

The launch ceremony was held on December 12, an indelible date in the memory of the men and women of the Italian Coast Guard, marking the premature death of Captain Natale De Grazia, the officer whose life was a testimony of humanity and courage and whose love of legality and the sea is still remembered, 25 years later, in the hearts of the community and the authorities.

Today, the new vessel of the Coast Guard, the CP420 “Natale De Grazia”, which will expand the operating capabilities of the corps’ fleet, was named for him in memory of his personal and professional commitment to the defence of the environment.

The launch ceremony and presentation took place in the presence of the General Commander of the Corps of the Port Captaincies, Coast Guard Admiral Head Inspector Giovanni Pettorino, the Chairman of Intermarine, Antonino Parisi, the CEO of Intermarine, Livio Corghi, the management of the company and Mrs Anna Vespia, Captain De Grazia’s widow, who christened the boat.

The choice of 12 December, at the express wish of the General Command, is a tribute to the memory of the Coast Guard officer, a valiant representative of our institutions, decorated with the Navy's gold medal for merit, who fell in the line of duty; the circumstances of his death, during his investigation, for the Reggio Calabria prosecutor, into the trafficking of radioactive waste on merchant ships in the Mediterranean, are still unclear.

The CP 420 is the first patrol boat in a new class of vessels named Angeli del Mare – Angels of the Sea – dedicated to those who worked at sea with generosity and sacrifice. Vessels designed and developed to perform the vital task assigned to the Coast Guard by history and by law: sea search and rescue, a mission that the new boat is able to perform even in the most testing meteorological and marine conditions.

A product of excellence from Italy's shipbuilding industry and a proud example of the country's maritime capabilities, this new type of self-righting boat was designed by the Intermarine research centre using world-leading technologies. It is one of the world’s largest Search and Rescue vessels, as well as the longest self-righting and unsinkable boat ever built in Italy. With its 10-strong crew, the CP 420 leads the way in naval technology, with state-of-the-art propulsion and communication instruments; a boat with an advanced command and control system, which guarantees greater autonomy, greater receptive capabilities and better logistics for the crew, for the rescue of people adrift in the sea and on-board during rescue operations involving large numbers of people.

The vessel, built in a light alloy at the Intermarine shipyard in Messina, is 33.6 metres LOA with a beam of 8.15 metres. The hull has a deep-V structure; its distinguishing characteristics, in addition to fast speeds, include excellent manoeuvrability at both high and low speeds, even in Beaufort scale gale force 9 and Stanag scale sea force 6 conditions.

Tenax pro maris salute is the boat's official motto, using the authoritativeness of Latin to express the significance of De Grazia’s work: “I fought tenaciously for the marine environment”.

This in essence is the Captain's legacy to the new generations and above all to everyone who wears the uniform and provides an invaluable service for the community.

On completion of the conformity check and the period during which the crew will familiarise themselves with the vessel, the administrative handover will be complete and the boat will be able to hoist the Italian Tricolore flag, which has been entrusted to the Captain designate, Lieutenant Commander Massimiliano Quinto.

“The CP 420 “Natale De Grazia” is a boat that, together with its crew, intends to demonstrate the values, the generosity and the passion of the Captain whose name it proudly bears,” said Admiral Pettorino.

With this innovative new product, Intermarine has further extended its production range. In the military sector, Intermarine has developed solid experience and knowhow in the design and construction of non-conventional vessels with high-precision operating requirements, and has established an excellent international reputation as a supplier to the world's most prestigious navies of technologically sophisticated boats such as minesweepers, of which it is one of the leading world designers, builders and outfitters. Intermarine has already built 44 minehunters, in 9 different configurations, for the navies of 8 countries, including the USA, Finland, Australia and Italy. Other boats built by Intermarine in the military sector include patrol boats in aluminium and composite material for search and rescue operations, notably high-speed multipurpose boats (UNPAV), versatile and modern vessels that are also used to control maritime traffic and ensure security where there is a threat of asymmetric warfare.